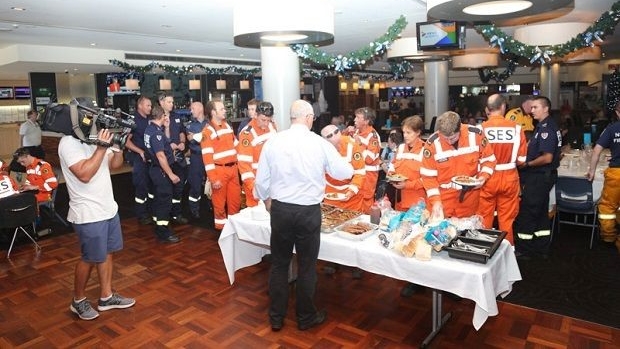 While residents of Kurnell have gradually returned to their homes as they begin to pick up the pieces following yesterday’s severe storm, plenty of work remains to return the Shire suburb to somewhere near normality.

Homes, the Desalination plant and the Caltex refinery were severely damaged in the storm with winds reaching 213 kilometres per hour, creating havoc and leaving a trail of destruction through parts of Cronulla and Kurnell.

Sharks Leagues Club acted as a refuge on Wednesday, providing a meeting place and shelter as well as meals and refreshments to the displaced residents and emergency services staff in what was a considerable logistical exercise.

Group CEO Lyall Gorman was proud the Sharks were able to contribute to the cause at a time when the local community needed it most.

“It was an outstanding effort from everyone involved and a true to testament to who we are as a club and what we stand for in our Community,” Gorman said. “It was incredibly well done to all under massive pressure.

“Nothing highlights more succinctly, the impact and influence our Club and our people can have on our Community.”

Gorman was also impressed by the resilience of the local community during a difficult time.

“The last few days have shown our Community has a unique capacity to unite together under circumstances such as this and its abundant generosity and support.

“We’ve also seen the amazing work of the various volunteer services and we are privileged in being able to give back to our Community and be a Community leader both in good times and sad and challenging roles such as this,” Gorman added.

Emergency services personnel and members of the Kurnell community were grateful for the support the Sharks offered during and immediately after the storm and later into the night on Wednesday, with catering staff organising food for over 150 people.

Michael O’Leary, Local Emergency Management Officer (LEMO) from Sutherland Shire Council was also high in his praise last night of the job the club had done in tending to the situation.

As residents have returned to start the rebuilding and repair process, the Sharks Leagues Club has now turned its attentions to supporting the emergency services staff including police, fire brigade and SES volunteers.

The Sharks Leagues Club hosted around 260 SES volunteers and services personnel for lunch and another 300 for dinner later that night, with those support efforts to carry on today and potentially into the weekend.

From providing a sausage sizzle, trays of Lasagne, batches of toasted sandwiches and mini pies and sausage rolls, it was a combined and concerted effort from all concerned.

The Sharks also loaded the Leagues Club courtesy bus with food and supplies donated by generous local businesses and delivered them to Martin Hall in Kurnell earlier today for distribution to those residents most affected.

Thanks to the following local businesses;