The Sharks Leagues Club have officially closed it’s doors ahead of the major refurbishment and redevelopment,

Work has now commenced on the major redevelopment, one which will see the home of the Sharks transformed into a facility set to be the envy of all NRL clubs.

The current building will be gutted, leaving a blank canvass from which to work, with the final product something he expects Sharks members to be proud of.

The Leagues Club will be rebuilt on the top two floors and half the basement level out to the ground, The third floor will be the main operating floor, and will include a bistro, cafe, 1800 square metre alfresco deck overlooking Woolooware Bay, gaming area and chairman’s lounge.

The top floor will predominantly be conference and function rooms, the largest catering for 550 people.

While many memories have been created on the playing field, almost as much history surrounds the Leagues Club itself.

From celebrating big wins, the Grand Final victory party of 2016 being perhaps the biggest of all, to supporting the Sharks and enjoying time with family, friends and other members and fans, the Sharks Leagues Club has been a home away from home and has meant a lot, to many people.

In the interim, the Sharks hope to soon finalise the amalgamation with the Kareela Golf Club, as they look to give Sharks members a new home, both for the next few years and into the future.

It’s the end of one era, with an exciting new chapter about to be written.

We will update you with the development progress and communicate information to all our members.

The key documentation has been signed with Moorebank Sports Club Limited (“Sporties”) in relation to the proposed amalgamation that would see Sharks take ownership and control of Sporties @ Kareela Golf Club.

As a result, the Sharks are now at the stage of seeking member and regulatory approval of the amalgamation.

A Notice of General Meeting will be issued shortly to Sharks Leagues Club members setting out date, time and place that a General Meeting of members will be held to consider the proposed amalgamation.

The Sharks also take this opportunity to reinforce the fact that its interest in Sporties @ Kareela Golf Club is long-term and not only for the period of the Sharks Leagues Club closure and redevelopment. Sharks will continue to own and operate the Sporties @ Kareela Golf Club following the opening of the redeveloped Sharks Leagues Club in two years’ time. This will in the long-term result in multiple venues in the Sutherland Shire for Sharks members to enjoy in the years ahead.
Further to the above, a Member Notice, in accordance with Clause 5 – Notification to Club Members of the Registered Clubs Regulation 2015 and 17AE of the Registered Club Act 1976; has been posted on the Sharks Leagues Club website and noticeboard.

A copy of the Memorandum of Understanding (MOU) between Sharks, Sporties and Sporties Kareela Temporary Company Limited, as required by the Registered Clubs Act and setting out the key aspects of the proposed amalgamation, has also been made available to members and can be viewed by going to the below link.

The Directors of Sharks unanimously support the proposed amalgamation and recommend it for approval by members at the forthcoming General Meeting.

2020 Board of Directors Election Notice 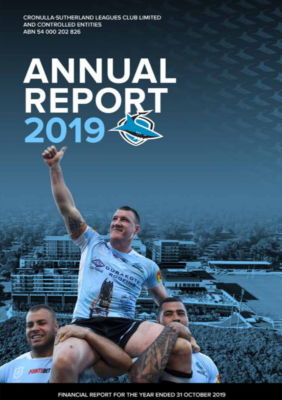