Happy 100th to our oldest Shark
Sharks Leagues Club member Ben Lee, who turns 100 on Wednesday, might just be our oldest living Shark.

On Monday, just two days out from his special birthday, Lee met one of the youngest Sharks, at least amongst the NRL playing group in 20-year-old hooker Blayke Brailey.

With a quick wit and a sharp memory, Ben told stories, chatted with Sharks Group CEO Richard Munro and club staff, while being presented with a Sharks NRL jersey emblazoned with ‘100’ across the back.

A club member for 40-plus years, Lee also brought along his signed letters of congratulations from Her Majesty the Queen and Australian Governor General Sir Peter Cosgrove, as the Sharks treated him to some lunch.

Before enjoying his Bay Bistro fish and chips, Lee had plenty of stories to tell.

“I moved to Cronulla from Rockdale when I was four years old,” he said. “Cronulla had a population of about 300 back then.”

He happily reeled off tales about his soccer days in the Shire, “Played for Cronulla, there was a team from Sutherland and we also travelled down to play Woonona near Bulli,” Ben added. “We played at Frogs Hollow near the pub, there was a field at Dunningham Park as well.”

A war veteran, Ben still plays golf, “only nine holes in a cart now,” his wife is 95 and going strong, they had a son Darryl Lee, who married Sarah (and we’re not sure if he was winding everyone up with that one) and he is still 5 foot 8 and a half, “strong bones, I’ve been that height for 80 years.”

He caddied for the great Don Bradman when he played golf at Cronulla Golf Club back in the day and even has his name on the honour board as a winner of the Cronulla Cup.

“Oscar Addison, he is a really good little player,” added Ben, who was wearing his 2019 Sharks polo shirt, signed by Gallen himself.

When his lunch with Sharks Duty Manager Matt Ivkovic was over Ben, who still holds a current driver’s licence, jumped in the car and drove home, thankful for the Sharks gesture and looking forward to his big day later in the week. 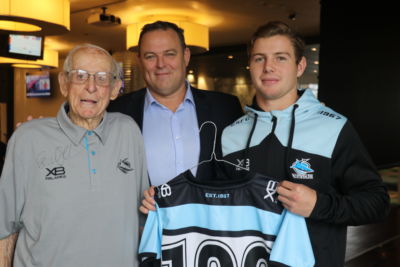 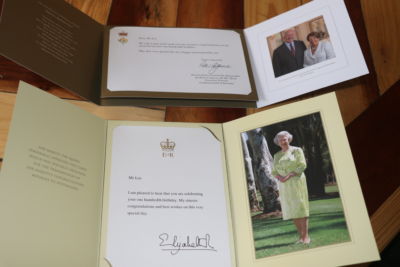