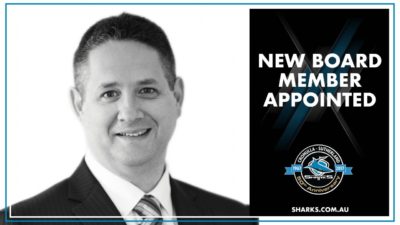 Our Club is excited to announce a new Member to its Board, with Mark Deutsch being appointed as a Director.

Having practiced as a lawyer on a full-time basis in Sydney since his admission, Mr Deutsch was previously a solicitor at Australia’s top-tier law firm Mallesons Stephen Jaques (now King & Wood Mallesons).

Mr Deutsch said he is excited to be a part of the Cronulla Sharks Board and looks forward with great anticipation to the opportunity to contribute to the future growth and development of the Club that the role of a Director provides.

“The work of the Board and the whole Sharks’ family in the past few years has been nothing short of outstanding, both on and off the field, and it has been a joy as a fan to watch that unfold,” said Mr Deutsch.

“The vision, commitment and overall focus of the Board to build upon and continue that success at all levels of the organisation and in the broader community has totally impressed me.

“It is truly a privilege to have this opportunity to make a contribution.”

Our Club warmly welcomes Mr Deutsch to the Sharks family and wishes him all the best in this exciting new chapter of its evolution.

Admitted as a practitioner of the Supreme Court of New South Wales in 2000 and holder of an unrestricted practising certificate in that State.